Fly-tipping is back in the news again and with good reason!

A recent documentary produced by BBC Panorama revealed how the government’s licensing system for waste carriers is failing to prevent fly-tipping.

Whilst all businesses that transport and dispose of waste in England require to be licensed with the Environment Agency, few are actually being checked.

Not only is fly-tipping on the increase, with more than 1 million fly tipping incidents reported in England in 2019, but hazardous substances such as asbestos are also being found amongst the rubbish, creating a real danger to public health.

The maximum fine for fly tipping is £50,000 and/or a five year prison sentence but only two people have been given the maximum fine since guidelines were introduced in 2014. That said, if you are caught fly tipping your old sofa, that could easily be an expensive mistake on your part!

The trigger for the recent upsurge in this activity is unknown but council officials say they have seen a rise in “man in a van“ incidents, where non licensed operators are just dumping rubbish. At the beginning of lockdown in March 2020 it was thought that it was because most of the tips had closed, but this excuse is no longer relevant.

At Bulman’s Removals and Clearance, as responsible waste collectors, we would like to see a tightening up and review of the sentences so that offenders are given bigger fines, especially for the more serious offences such as dumping hazardous waste.

The sad truth is that if someone offers to take your rubbish away cheaply, it will probably end up as part of our beautiful English countryside. 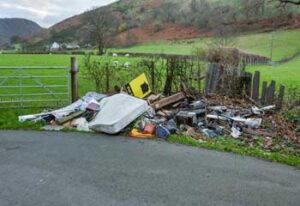 Ironically, Bulman’s Removals and Clearance sadly benefit from these illegal tips as we are often called in by overstretched councils to clear them. We have also, and continue, to help private landlords, property management companies and commercial premises, all of whom have suffered from this problem in the last 12 months. Whilst there are fewer people around to witness fly-tipping it is increased in car parks, gardens and parks across the area we serve.

So what guarantees do you have that we are not just another “man with a van“ fly-by-night company?

If you are in any doubt of the credibility of the company you are speaking to, walk away! The environmental impact of fly-tipping, the danger to health to both humans and our wildlife cannot be underestimated. We live in a world where very little is made using natural products only; thinking twice gives you peace of mind and any waste carrier worth employing, will be happy to talk you through their process, where they are taking things and share relevant documentation with you.

And, if that’s not enough, did you know that householders can also face a fine if they do not take reasonable measures to ensure that their waste is disposed of lawfully.

According to the National fly Tipping Prevention Group: “ Householders also have a Duty of Care to check that anyone they commission to take away and dispose of their domestic waste is registered. Householders are not required to supply documentation such as a waste transfer note but they could face a maximum fine of £5,000 if they fail to take reasonable measures to ensure their domestic waste is handled by an authorised waste carrier. It will be for the courts to decide what these ‘reasonable measures’ will comprise on a case-by-case basis.”

If you have any questions at all about how we take care of your waste, please do contact us  and check out our FAQs. Not all waste collection companies are what they seem!

This may be a good place to introduce yourself and your site or include some credits.

Whatever move or clearance you are looking to achieve, it all starts with knowing your options.

We can help with that.  Just fill in the form to request a free estimate with Bulman’s, and we’ll advise you, so you can get your ducks in a row.

Choose the services you are interested in now, and we’ll get on it…